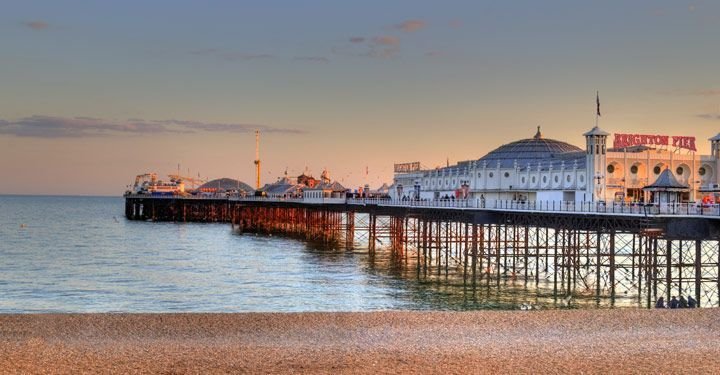 One of the UK’s most famous beaches, Brighton Beach is a pebbly beach with certified Blue Flag waters a 4-mile promenade that buzzes with life in all seasons. It is known as London’s beach, even though it is 47 miles away. Unsurprisingly, it can get very crowded on Bank Holidays, but that’s all part of the appeal.

The waters can be chilly but are popular for swimming and watersports such as windsurfing, sailing, kayaking, stand-up paddle boarding and wakeboarding. They all look good from the comforts of a deckchair! Kids can have fun in the free paddling pool. Sand is imported each summer to accommodate the volleyball court.

There’s a Victorian pier nearby and a traditional fairground along with cafes, restaurants, fish and chips and beach clubs. Next to the pier is the Sea Life Centre which is probably the oldest aquarium in the world, dating back to 1872.

A stroll along the prom will be enhanced with an ice cream or an entertaining performance by street performers around the Fishing Quarter of the beachfront. Brighton Beach is within walking distance of the town and shops. There are car parks nearby (fees apply) and a regular bus service.

The eastern end of Brighton Beach is an official naturist beach. When it opened in 1980, it was the first in the UK.

In December, the beachfront hosts the Winter Solstice celebrations followed by the annual New Year Swim. Brrrr! There’s lots of homemade paper lanterns and lantern making workshops if you want to make your own rather than buying one for a local shop.